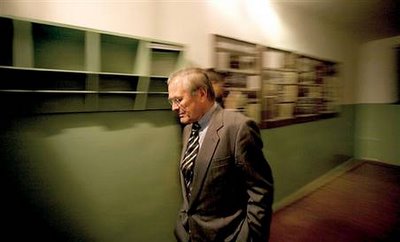 Under the picture and caption above, Newsweek Online has a story by Michael Isikoff about the excesses of TALON. TALON belongs to the Counterintelligence Field Activity, a tool of the Defense Dept.

But that's not how the Pentagon saw it. To U.S. Army analysts at the top-secret Counterintelligence Field Activity (CIFA), the peanut-butter protest was regarded as a potential threat to national security. Created three years ago by the Defense Department, CIFA's role is "force protection"—tracking threats and terrorist plots against military installations and personnel inside the United States. In May 2003, Paul Wolfowitz, then deputy Defense secretary, authorized a fact-gathering operation code-named TALON—short for Threat and Local Observation Notice—that would collect "raw information" about "suspicious incidents." The data would be fed to CIFA to help the Pentagon's "terrorism threat warning process," according to an internal Pentagon memo.

A Defense document shows that Army analysts wrote a report on the Halliburton protest and stored it in CIFA's database. It's not clear why the Pentagon considered the protest worthy of attention—although organizer Parkin had previously been arrested while demonstrating at ExxonMobil headquarters (the charges were dropped). But there are now questions about whether CIFA exceeded its authority and conducted unauthorized spying on innocent people and organizations. A Pentagon memo obtained by NEWSWEEK shows that the deputy Defense secretary now acknowledges that some TALON reports may have contained information on U.S. citizens and groups that never should have been retained. The number of reports with names of U.S. persons could be in the thousands, says a senior Pentagon official who asked not be named because of the sensitivity of the subject.

No doubt the peanut butter was meant to gum up their mouths and make communication impossible. So the next time you go to the grocery store, watch out for suspicious people in the peanut butter aisle. But don't worry, the Guardians have you under observation.

And another thing. Was Rummy at the museum to get some fresh ideas for Abu and other locations?

Comments:
At this point, I think the KBG and others can learn from us.