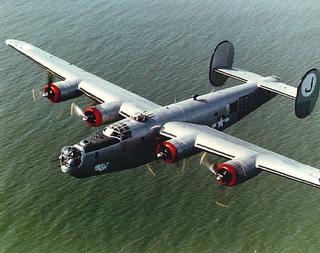 The Consolidated B-24 Liberator was the other great US heavy bomber of WWII. With its 4 turbo charged P&W engines and Davis air foil wing it was able to carry more bombs longer distances than its older partner the B-17. Its longer range also made it very effective on patrol against U-Boats in the North Atlantic. The 18,000 built made it the most numerous type built by the US. Variants of it served in all theaters of the war in many capacities. Sadly, of those 18,000, only 3 are in flying condition today.