With the Republicans still successfully choking the economy, many towns are looking to naming rights and ad placement on municipal property to pay the bills.


It is far from clear whether corporate logos will be painted on Baltimore’s fire engines any time soon. Officials in Mayor Stephanie Rawlings-Blake’s administration have expressed doubts about whether the proposal would generate enough money to keep even one fire company open.

But in exploring the option, Baltimore is joining dozens of other financially struggling cities, transit systems and school districts around the country that are trying to weather the economic downturn by selling advertisements, naming rights and sponsorships to raise money.

Such marketing schemes have long been used by sports teams and some arts organizations. But now, straphangers in Philadelphia buy fare cards blazoned with ads for McDonald’s and ride the Broad Street Line to AT&T Station (formerly Pattison Station), where the turnstiles bear the company’s familiar blue and white globe.

KFC became a pioneer in this kind of unconventional ad placement earlier in the downturn, when it temporarily plastered its logo on manhole covers and fire hydrants in several cities in Indiana, Kentucky and Tennessee after paying to fill potholes and replace hydrants. 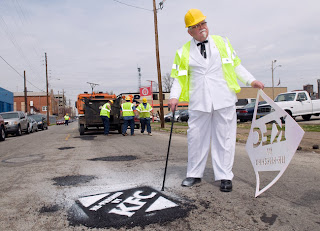 The drawback is your name is on it when it falls apart again. But if police cars looking like NASCAR racers is what it takes, maybe people will realize what Republicans are doing.