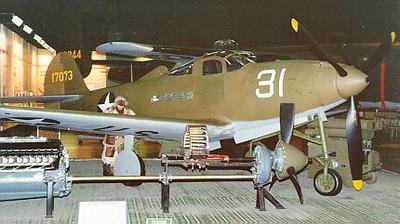 The P-39 Airacobra was a small fast fighter from the Bell Aircraft Co of Buffalo, NY. This picture gives a good look at its most unusual feature.The Allison engine was mounted behind the pilot and used a drive shaft passing under the pilot to the propeller. This allowed the mounting of the 37mm cannon thru the propeller hub. Due to service changes, this plane never performed as well in air-to-air combat as it should have. However, the cannon made it an excellent ground support and tank busting aircraft. For this reason it was well received by the Soviet AirForce, who took delivery of more than 5000 of the planes. If you look carefully, you can also see the car like door on the side of the cockpit. No sliding canopy for this little warrior.